My subversive attempts to do something useful.

The rotary piston array (RPA) is the possibly most compact and most elegant machine to transform the volumetric change of gas into shaft work and vice versa. It can be used as pneumatic motor, steam engine, gas compressor, vacuum pump and the like, but also as part of new heat or combustion engines which  like the Stirling engine  open new ways to harvest renewable energy. Other possible uses are refrigeration and air-conditioning.

The machine comprises an array of equally shaped twisted rotors with parallel axes. The rotors constitute the walls of sealed cavities or working chambers, which move axially from one end of the array to the other in response to synchronized rotor rotation. The cavities may change their volume during their travel and thereby compress or expand the air enclosed. The rotors do not touch one another to avoid wear and friction, but the gaps are narrow enough to keep the loss of gas neglectable above a certain rotational speed. Below is a simple RPA air compressor with six rotors shown in three different sections. Note how the cavities develop and move and change their volume and finally vanish.

One of my own contributions is the synchronization mechanism shown below, the synchronization rings. The rings roll on one another with very low friction. The picture does also show one of my other inventions, namely the rotating valves where the air bubbles emerge. They ensure optimal sealing while being robust against the thermal dilatation of machine parts.

The RPA can be used in several ways to convert temperature differences into electricity. A not so straightforward technology is the following Brayton cycle heat engine with two RPA's, which uses atmospheric air as a working fluid. This will work even in situations when conventional steam technology fails or does not pay.

The machine is analogous to a jet engine, but the compressor and expander turbines are replaced by RPA's, and the burner is replaced by a long subsea tube, which constitutes a heat exchanger in the sea water. Compared with a turbine, the RPA has fewer and less complex parts. The machine will run in both directions, when the air is warmer than the water, but also when it is colder.

Depending on location and season, one may often observe temperature differences of 5 to 15 K or more. Under such conditions, the conversion efficiency is only a few percent. But on the other hand, the amount of heat contained in the sea and the atmosphere is so huge, that these few percent can be a lot, and the energy is for free. The machine will be profitable if tubes are cheap enough.

A Stirling engine of given power is the larger, the smaller the temperature difference is. And it needs to be large as a whole, with large pistons and cylinders and everything. Perhaps too large and expensive for this application. And it would need some extra device to extract the heat from the water. In contrast, the only thing that becomes large in the RPA machine is the heat exchanger tube, which also collects the heat. A great advantage.

The RPA heat engine may also be useful to recover waste heat from all kinds of industrial processes.

The almost same RPA heat engine as the one above can convert solar radiation into electricity. Just the heat exchanger is replaced by an absorber tube, onto which the sunlight is concentrated by a parabolic through.

The transparently shown rotors can, but don't need to be made of fused quartz. Fused quartz has almost no thermal expansion. The rotors are actually hollow, squashed tubes.

Between the rotors there is air enclosed. When the rotors orbit, the enclosed air oscillates between the hot and the cold sections, and it is also being compressed and expanded. It performs a Stirling process and generates useful power.

The novel design overcomes a grave drawback of conventional Stirling engines, namely the inefficient heat transfer to and from the working gas by conduction in heat exchangers. The RPA does not have this problem, because it transports heat by intermediately storing it on its moving surfaces, which alternatingly are in contact both with the working gas and then with the surrounding atmosphere. The materials to be used are no longer required to be good heat conductors, but can instead be better at withstanding high temperatures, which in turn allows achieving better thermal efficiencies with the machine. Moreover, one can expect that power control is easier.

The Rotary Stirling Engine is compact and light. Its gearings can be made with a 3D milling machine, and so can the moulds for the rotors.

More information is in the documents below. Patents are pending.

This is a wave-driven drainage pump with no moving parts. It can cheaply be made of concrete and may be useful where the sea level is rising.

The shown device pumps rain water from below sea level (small waves) into the sea (big waves). The left side is an OWC-type wave chamber whose oscillating air pressure drives the cascade of artesian wells on the right side. Given enough basins and a large wave chamber, the water can, in principle, climb to any height.

Together with a water turbine, the wave pump can be used for electric power generation. The higher the water is pumped, the smaller the turbine can be. This is an advantage over other wave power technologies such as the tapered channel, which can elevate the water only to a limited height. Another advantage is that the wave pump may elevate freshwater, in a closed loop, which is less corrosive to the turbine than sea water.

More information is in the documents below. Patent is pending.

Below a picture from testing a protype:

Here is a video:

I have tested a wave pump prototype at the Hydraulics and Maritime Research Centre (HMRC) in Cork, Ireland, under MARINET funding. A detailed report is here:

Below are some pictures. 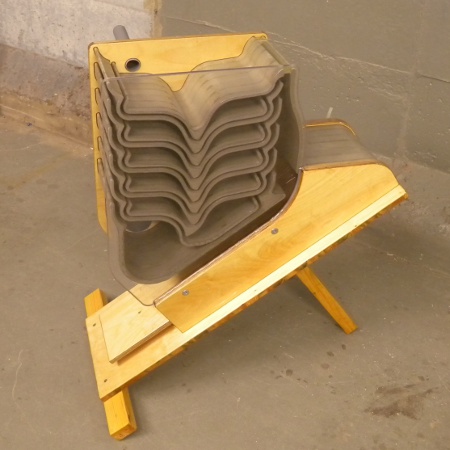 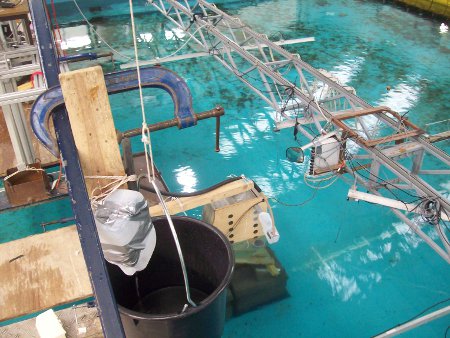 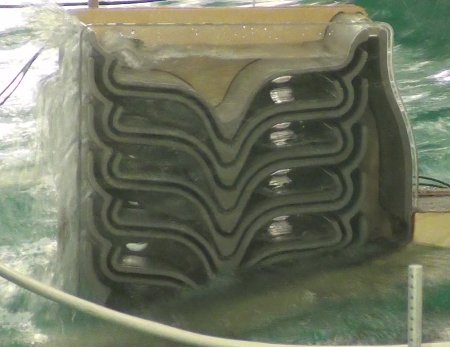 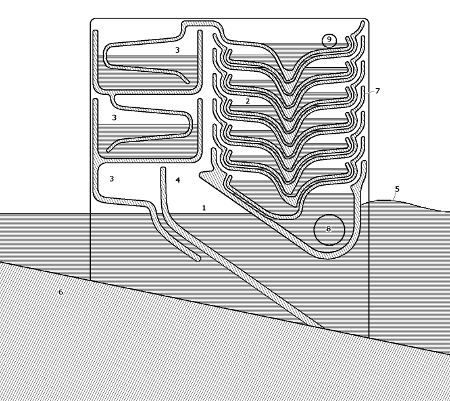 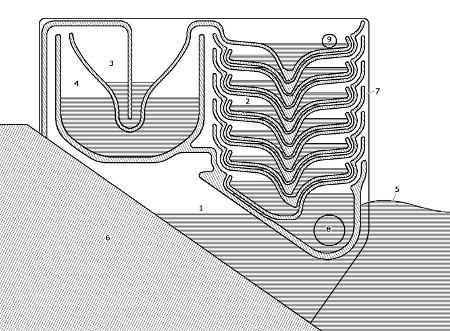 Heat Engine With No Compressor

Unlike most other heat engines, this one has no compressor and no expander. Its thermodynamic cycle consists of two isochoric and three isobaric steps. One advantage is that the working fluid is not constrained to be a gas, but it can also be a liquid, or even a solid. It can, for example, directly use the hot water in a geothermal borehole as its working fluid.

Its basic component is a special pump that allows an efficient heat transfer to and from the working fluid while the fluid is enclosed in the pump at a constant volume. The pump can be a simple gear pump with thin heat conducting walls. Two of these pumps (1, 2) are coupled mechanically as well as thermally. One pump (2) is slightly bigger than the other (1). The bigger pump pumps a slightly bigger volume of fluid than the smaller pump, and it generates a slightly bigger torque under the same pressure difference so that it will drive the smaller pump. Both pumps are split into a large number of layers that are alternatingly arranged with a lot of heat conducting walls between. The other components are heat exchangers. The pumps perform the isochoric steps (A, C) of the thermodynamic cycle whereas the heat exchangers do the isobaric steps (R, B, D). The following diagrams show the flows of heat and working fuid.

Pump C must get rid of a slightly bigger amout of heat than pump A can absorb, the difference is put into the recuperator R. The other two heat exchangers B and D exchange heat with the outer world. The working fluid does, of course, change its volume during the process, because otherwise the engine would not be able to do any work. But the change of volume takes place between the two slightly different pumps, not in a compressor or expander device. The change of volume moreover takes place outside the pumps, for example in a kilometer-long borehole B, which allows for working fluids with a relatively small thermal dilatation such as water.

However, the proposed heat engine can better be constructed with the rotary piston array as pumps, which can efficiently transfer heat between neighbouring working chambers on the rotor surfaces. But it also saves weight and space and the expensive copper plates. The rotors are twisted at a constant pich to avoid compression. Below, the letters indicate the usage of the working chambers.

The next example shows the same heat engine with a solid working fluid, a tensioned steel wire, and cable pulleys serve as pumps. The two middle pulleys A and C are mechanically and thermally coupled and have slightly different diameters. Heat and cold, respectively, are applied at the heat exchangers B and D, the wire that is wound many times between the double pulleys. Heat can be applied with a flame, for example. Different temperatures at B and D will change the tensions there, and the relaxation of these drives the machine. The arrows show the directions in which the wire moves.

More information is in the document below. Patent is pending.

BTW - this engine can be used as a cooling pump that is driven by the heat difference to be cooled down, e.g. with cooling water as a working fluid ... and with no electricity needed ... Fukushima would have not exploded if there had been such cooling pumps ...

A less scientific invention. But helps to avoid paying money to rich land owners when traveling. 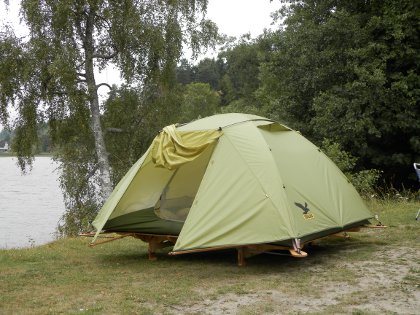 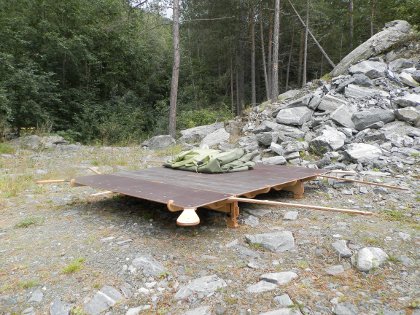 The portable tent platform makes it possible to build a tent well above humpy or sloping ground, especially when traveling with a car and off the designated campsites. Together with an ordinary camping tent it constitutes a cheap and space-saving alternative to a campmobile, or even to a roof tent. It can be packed densely enough to be kept in the narrow cellar of a city apartment.

The tent platform is being assembled from multiple parts, which are carried in a frame on the car roof. The assembly takes only a few minutes. The tent platform has height-adjustable feet. Unevenness, water, dirt and bugs are being kept under and outside the tent. The tent platform has multiple extensions to fasten the tent on, which make it unnecessary to drive tent pegs into the ground. Erecting the tent becomes easy even on hard ground such as rock or asphalt.

The tent platform can be manufactured in any better carpenter's workshop or furniture factory. It is made of varnished plywood and a few standard screws.